If there is something that is woven through my life like a red thread, then it would be my love and enthusiasm for dogs!! Even as a child and teenager, I’ve already spent a lot of time with them and walked the dogs from our neighborhood regularly because I wasn’t allowed to have one of my own.
It was only in the year of 1995, that my wish came true and Joy moved in, a wonderful mongrel, who kept me company for 13 whole years. When she became 2,5 years old, I saw myself faced with the following decision: Should I take a Rhodesian Ridgeback (which have already fascinated me back then) or a Doberman bitch under my wing. In the end, I decided in favor of the Doberman and like this, Ginger spent the rest of her life at my home and we became a great team.
Afterwards I’ve finally made my dream about getting a Rhodesian Ridgeback come true: At the beginning of 2007, Kimba moved in with me, a nine months old bitch who was in search of a new home. It was love at first sight and this in every sense… even if she put my knowledge about dogs repeatedly to test in the early days

. But it was exactly this primal nature of hers which encouraged me that the Ridgeback was “the love of my life” and that this unique breed is one which I cannot image my world without.
It was obvious that a second Ridgeback followed after Joy’s death, and around this time, I’ve deliberately decided for a puppy from a good breeding. Chamchela, the little whirlwind from the house of Ndoki of Claudia Körner, was granted entrance into my home and especially my heart. She developed so gorgeously, that I wished to found my own breeding with her as its original dog.  Together we’ve managed to accomplish all requirements, and like this, a big dream came true for me in the year of 2010. The Rhodesian Ridgeback Kennel “UDAKO” was approved by the FCI/VDH thus the foundation stone was laid, so that I am now able to breed this wonderful dog breed with strong passion and a lot of love.
And due to the reason that it is a matter of course for me to keep dogs which are no longer able to partake in breeding anymore, because of age or health reasons, it will stay a tiny but mighty breeding station. 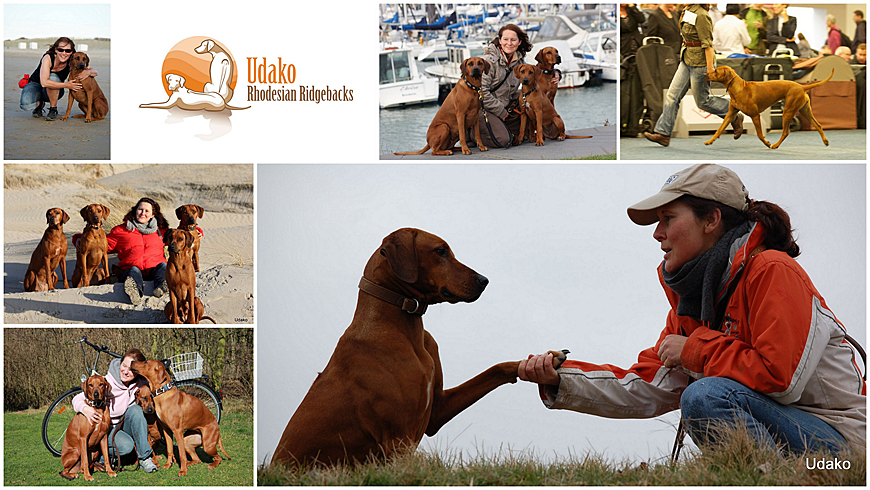